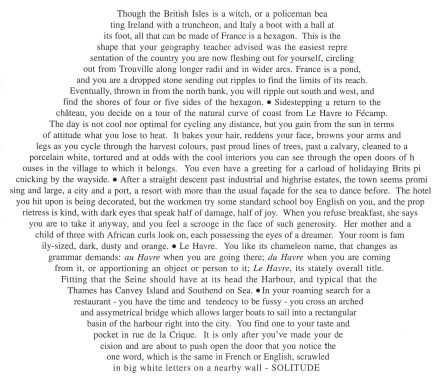 Though the British Isles is a witch, or a policeman beating Ireland with a truncheon, and Italy a boot with a ball at its foot, all that can be made of France is a hexagon.  This is the shape that your geography teacher used as the easiest representation of the country you are now fleshing out for yourself, circling out from Trouville along longer radii and in wider arcs.  France is a pond, and you are a dropped stone sending out ripples to find the limits of its reach.  Eventually, thrown in from the north bank, you will ripple out south and west, and find the shores or mountains of four or five sides of the hexagon.

Sidestepping a return to the château, you decide on a tour of the natural curve of coast from Le Havre to Fécamp.  The day on which you set out is not optimal for cycling any distance, but you gain from the sun in terms of attitude what you lose to heat.  It bakes your hair, tans your face, browns your arms and legs as you cycle through the harvest colours, past proud lines of trees, past a calvary cleaned to a porcelain white, shining and tortured and at odds with the cool interiors you can see through the open doors of houses in the village to which it belongs.  You even have a greeting for a carload of holidaying Brits picnicking by the wayside.

After a straight descent past industrial and high-rise estates, the town seems promising and large, a city and a port, a resort with more than the usual façade for the sea to dance before.  The hotel you hit upon is being decorated, but the workmen try some standard schoolboy English on you, and the proprietor is kind, with dark eyes that speak half of weariness, half of joy.  When you refuse breakfast, she says you are to take it anyway, and you feel a scrooge in the face of such generosity.  Her mother and a curly-haired child of three look on, each possessing the eyes of a dreamer.  Your room is family-sized, dark, dusty and orange.

Le Havre.  You like its chameleon name, that changes as grammar demands: au Havre when you are going there; du Havre when you are coming from it, or apportioning an object or person to it; Le Havre, its stately overall title.  Fitting that the Seine should have at its head the Harbour, and typical that the Thames has Canvey Island and Southend-on-Sea.

In your roaming search for the restaurant – you have the time and a tendency to be fussy – you cross an arched and asymmetrical bridge which allows larger boats to pass into a rectangular basin of the harbour and right into the city.  You find one to your taste and pocket in rue de la Crique.  It is only after you’ve made your decision and are about to push open the door that you notice the one word, the same in French or English, scrawled in big white letters on a nearby wall –