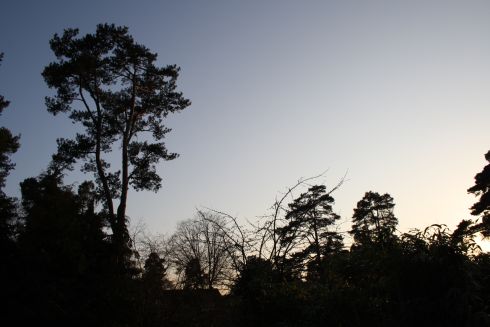 The scots pine with which I’ve been foolish enough to identify myself has survived the latest threat to it.  According to the council officer’s inspection report, its felling ‘would represent a significant loss of amenity to the locality’.  If you are a public servant writing to residents, I guess you can’t say that you’re granting a tree a reprieve because it’s beautiful, and a symbol of all that’s good in the world.  However, its two shorter neighbours have not been so fortunate.  Since they had only ‘limited general amenity value’ and were also reckoned to be a ‘potential hazard’, the week before last they were chopped down.

It seems to me that they were condemned more for not growing straight and true than for safety reasons.  But I liked how they were; they leant into each other like lovers (there I go again, anthropomorphising furiously).  Although perhaps it would be more accurate to say that one was seeking to avoid the kiss the other was leaning in to give.  Or maybe they were simply two old folk joined at the hip, bending their heads into the prevailing south-westerlies, and holding onto their hats.

The owner of the neighbouring property (now known as ‘tree-murderer!’ round these parts) will not be liking the fact that he has to plant one new tree of similar standing to replace the two he has been able to axe.  It’s a classic piece of quid pro quo political compromise on the local council’s part, dressed up with shaky and partisan evidence about safety, and it leaves no-one entirely happy.  But I couldn’t quite muster the energy to campaign for the preservation of the two condemned trees; thinking that if I did, it might ultimately tell against me and ‘my’ tree the next time it comes under threat, as it surely will.  So I guess I quid pro quo’d too.  Perhaps I should have more faith in the administration of local planning process, but I don’t.

In the end the most important thing is that I am still a tree.

One thought on “I am still a tree”