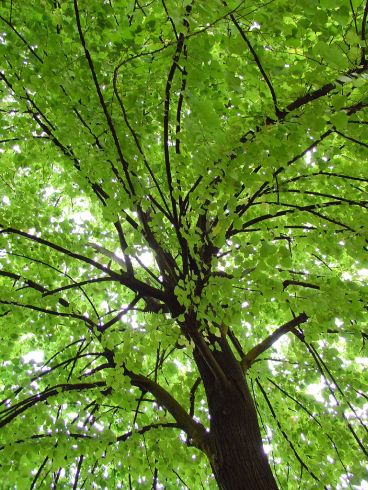 Three closed stands of trunks, each high-crowned with a spread of fresh green heart-shaped leaves from which dropped the sticky summer honeydew of aphids onto any car mistakenly seeking shelter beneath them.  These were the trees that I could see from my new bedroom.  I remember the wind in their leaves; and that on still midsummer days, they stayed alive with the sound of honeybees.

The limes divided our garden from a horse stud and oversaw my burgeoning freedom.  My bedroom – aged sixteen, the first I had all to myself – was on the ground floor, next to the kitchen; what in the time before refrigeration and fitted cupboards had been the pantry.  Now records, books and fanzines began to line its shelves.  Between the shelves on two sides and the walls in which window and door were set, there was just about room for a bed.  In it one summer’s day I lost my virginity to a girl as innocent as me.  Afterwards she confessed her need to tell someone, anyone who wasn’t me, since obviously I knew already, having very much been there, having not been entirely detached from my body throughout the experience, rather indeed having been more or less wholly – if inexpertly – engaged in it.  And it turned out that the person she told might have been the person who might similarly have confided in her, for I’d gone out for a drink with that friend earlier in the year but as she and I settled into talking, we were latched onto by a male friend of mine who couldn’t or wouldn’t read my signals and the moment, if it was one, passed.  Such is the random nature of teenage attraction.

Garden Cottage.  That was its idyllic name.  It was another tied cottage – perhaps once a head gardener’s, for it was set into one of the redbrick walls of the orchard and vegetable beds of a Georgian mansion owned by the family which gave their name to one half of a well-known pickle-making concern.  Through the kitchen window we could see the Victorian greenhouse and the pear and apple trees.  Our cottage’s own garden made use of the other side of the wall.  Hard by it a large plum tree grew, until the great storm in 1987 snapped its trunk, though even after that it made efforts to resurrect itself.  There is a photo of my grandfather holding a set of wooden steps by this very tree, not long before it and he were felled.  We were collecting fruit from the higher branches.  The sun cuts pleasing shadows out of the steps of the ladder, and my grandfather, white hair contrasting with the black frame of his glasses, and wearing a striped shirt and a pale tie, is pointing at the camera and trying to resist the grin which is forming on his face.

The sun always shone on Garden Cottage and the sun always shone on my birthday, but not the day I turned eighteen.  Instead, the rain came down.  We persisted with a barbeque, setting up the black hemisphere on legs in the shelter and lee of the limes.  There is another photo, of me tending the sausages, somewhat incongruously dressed in blacks and greys, my flat-top hair rather rain-affected and bedraggled.  I had a copy of Meat is murder but I didn’t turn vegetarian until six months after that barbeque.  Would my world have been different if Johnny Marr hadn’t sought out Morrissey and the Smiths had never existed?  Would my life have been more red-blooded if I’d carried on eating steak?  Or regardless of what we might generously call those intellectual and emotional influences, would I still find myself more or less where I am today?

I can’t help but keeping asking those kinds of questions, and trying to answer them.

Photo of common lime by Dane Larsen via Flickr.